Tuesday we wanted to give it a try: to go quite high over the rooftops of the „Big Apple“, as the Americans affectionately call their New York. So we decided to „climb up“ the Empire State Building. Thanks to the New York CityPass we were allowed to go up two times

So guess who went up as one of the first people in the morning?

After the airport-like security check Rico needed to leave his harmonicas and entrust them to the officers. We then used the chance to borrow the equipment for a free audio tour. They whispered many interesting things about the Empire State Building in our ears! So much that you cannot remember it all. Some things we still remember are the facts that the building was pulled up in a few months (the people from our Elbphilharmonie should take it as a good example and hurry up with their constructions), there were places to grab some food and restrooms for the workers on 4 floors, the rivets were used red-hot and the whole thing weighs many thousands tons. Oh, yes: and the audio guide always highlighted how admirable the Americans are and what great things they have achieved… Well, now you know the most important facts and we are going up to the 86th floor! 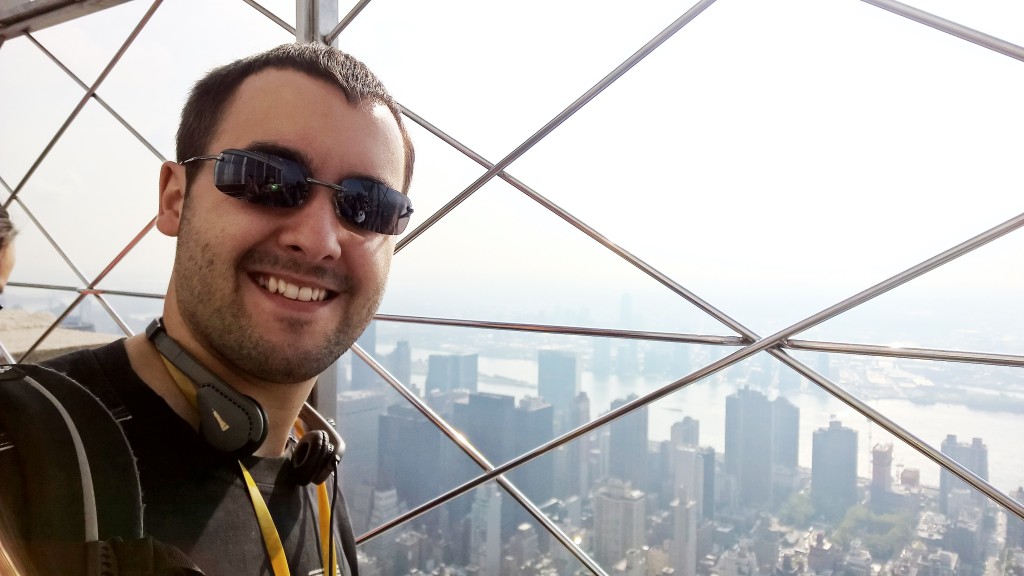 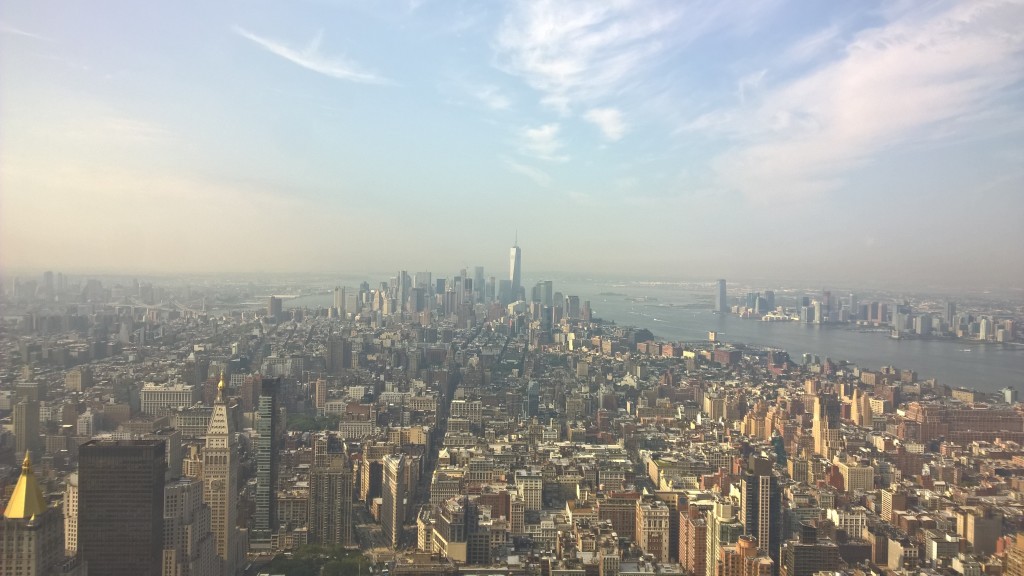 view to the south (Manhattan Downtown) 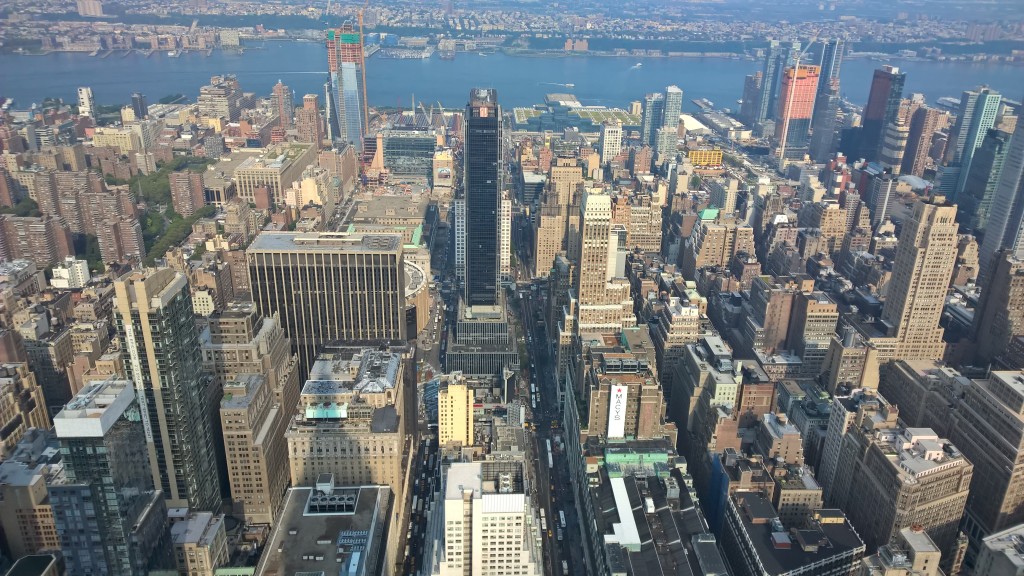 view to the west (down) 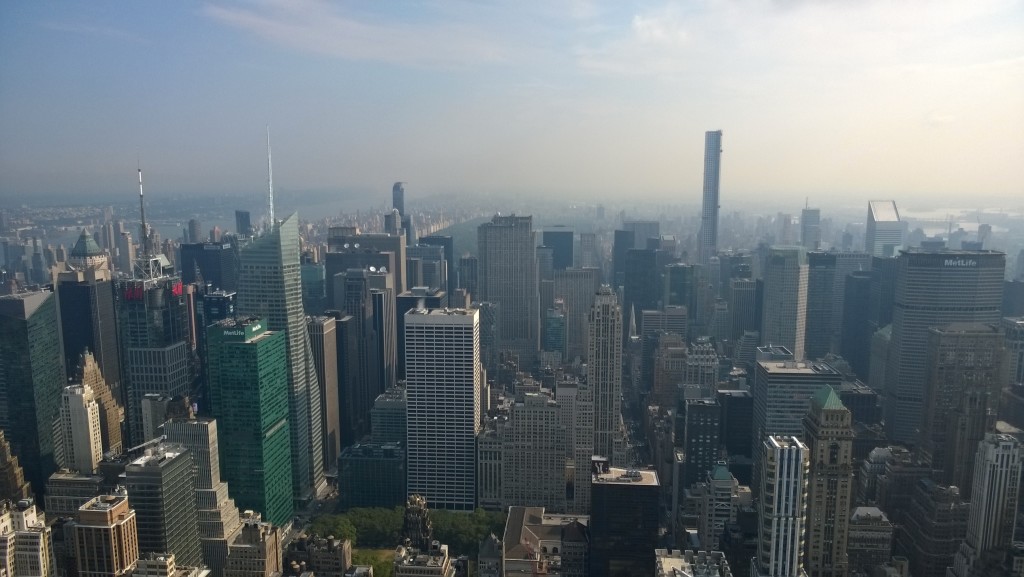 view to the north ( in direction to Central Park) 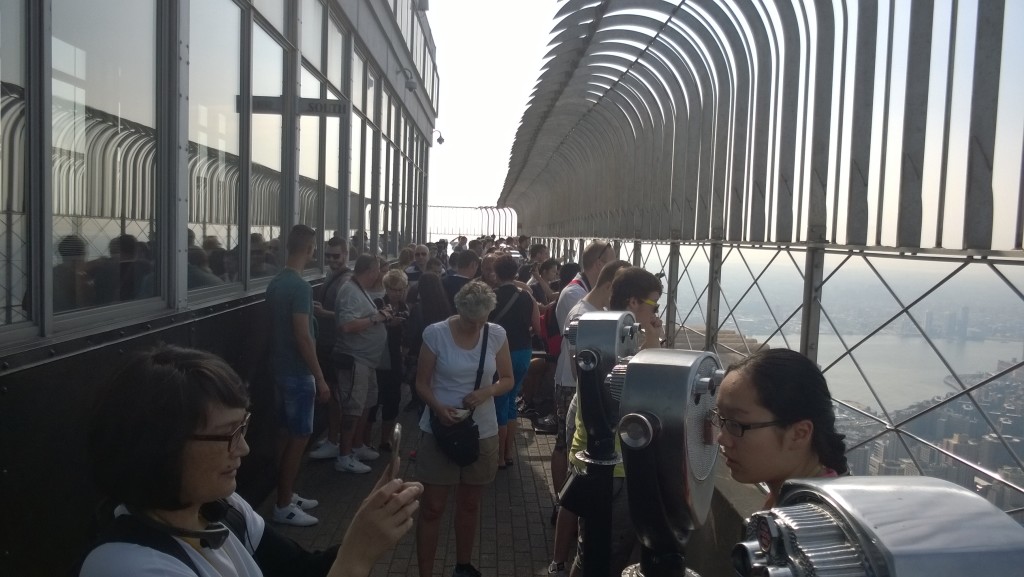 The moment it turned out to be very crowded we decided to go back on the streets – and there it was: Macy’s! Macy’s is a huge department store with everything you could wish for. (Keep in mind: Rico still did not have his luggage and needed at least some clothes.)

There were special discounts: up to 65% and since we are tourists we received an extra discount for 10 %. In our CityPass we found yet another voucher with 15%. We gave it a try. Our wish is to one day go to the cashier and get money back without paying anything. In the country with unlimited opportunities this should be possible, right? 😉

For lunch we went to one of the many Subway-restaurants in New York. Yummy and favorable compared to food from other restaurants with waitresses. Afterwards we hurried back home to see whether Rico’s bag had arrived – Singapore Airlines told us that the luggage would arrive approximately between 1 and 3 pm at the hotel. We were at the hotel and at some point Rico’s phone rang. A confused voice told him that his bag arrived in New York and gave him a tracking and telephone number.

What now followed was chilling, sleeping, a mixture of frustration, boredom, sleeping, blogging, nibbling sweets… So he grabbed the phone and called the number. After some ranging someone took the call. Rico needed to give out the name of the hotel and address. But then they told him that his luggage would arrive between 7 and 9 pm. Wow… how long shall we wait this time? He hung up and the game stated from anew … boredom, sleeping, nibbling sweets, chilling, frustration …

You can find out how it goes on in part 2